In the sections below, my game is named unrealgame5, and any appearances of this string should be replaced by your own project name. This page outlines the process of setting up the Gameplay Ability System for use in an Unreal Engine 5 game using C++. Blueprints can still be used for prototyping new abilities, which can later be translated to C++.

To setup our UE5 project to use the required modules, we need to edit our <PROJECT_NAME>.build.cs file. This file should have been generated by Unreal Engine when your project was created, and for me my file is named unrealgame5.build.cs

Initial contents of unrealgame5.build.cs, before I made any changes.

Then within the editor go to Edit->Plugins... and enable the Gameplay Abilities plugin. You will need to restart the editor for the changes to apply.

To set up the scaffolding for the GAS, we need a few things -

So, to complete this setup you will at least need to define a few new classes for your project.

For my project I follow the same naming convention used with GASDocumentation. I’ll paste it below, but for the first few files required to set up the Gameplay Ability System (GAS), we are defining the backend of the system so none of these conventions apply. For these files, I added the GAS_ convention.

First, we need to modify the contents of the header file for our unreal project. My project is named unrealgame5 so the file is unrealgame5.h, and the contents are below. If you already have information here, just make sure the EGASAbilityInputID enumeration is added to the header file and save your changes. This enumeration is used to correlate input actions to activate certain abilities in our game.

Note: Attack below must either be changed to match or made to match some keybind within your Edit->Project Settings->Input options menu. 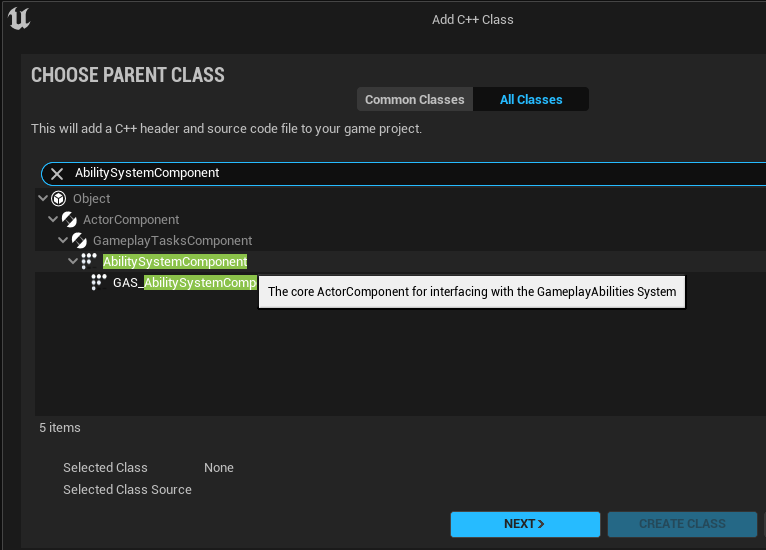 I named this class GAS_AbilitySystemComponent, and the generated files are below. You don’t need to put anything else in here for now, buy you may later. This is just a simple example of the parts and pieces of GAS.

Next, we need to create an AttributeSet for our game. Repeat the process of creating a new C++ sourcce file for your ue5 project, but this time inherit from AttributeSet

I named this class GAS_AttributeSet and the files genereated are below

In the files below, my character is named ThirdPersonCharacter, so any appearances of this string may need to be replaced with your character’s name instead. To setup your character that inherits from ACharacter base class, make the following changes to your files.

In the ThirdPersonCharacter.h file, make sure you’re inheriting from public IABilitySystemInterface. The start of your class should look like this. Pay attention to the includes.

Now we need to modify the character’s constructor to add the new components we’ve declared. I removed the code from my constructor that wasn’t related to the GAS. The additions are below.

So we have the components we need, and the next step is to provide the required definitions for virtual functions we’ve inheirted from IAbilitySystemInterface

To start, we declare the required virtual functions that we will need to define to use the GAS.

Next we need to overload a virtual function InitializeAttributes() to handle initializing the attributes for our game at the start. We also declare the DefaultAttributeEffect member variable to help define and apply the default attributes for our character.

Notice that we use the UPROPERTY macro to apply EditDefaultOnly to our components. This will later allow us to modify these components in the UE5 editor for our character’s blueprint, so we can dynamically add and remove attributes and abilities for our player without modifying the code each time.

And we define GiveAbilities below to handle the allocation of default abilities to our character.

For the next step, we need to override PossessedBy and OnRep_PlayerState() to define how to update the server and client of the player state respectively.

And see the definitions for these functions below

As a final modification, add the following code to the function equivalent to ThirdPersonCharacter::SetupPlayerInputComponent() in your project. This is the same code as the last portion of OnRep_PlayerState

And just to be sure we have all the headers we need, here are the final includes for my character

At this point we have configured GAS for our project and our character, so we’re ready to start defining our abilities!

In my assets folder, I just created an Abilities subdirectory and continued with the steps below, creating the assets within this directory.

First I created a new Blueprint Class using the editor and derived from the GameplayEffect class. Applying this effect will result in the player or character being granted a set of default abilities. 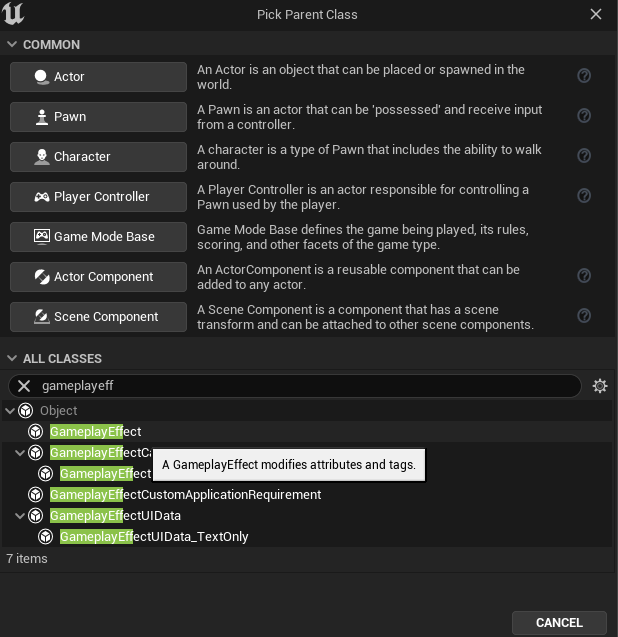 I named this GE_CharacterDefaults, and opened it for editing. The screenshot below contains all settings I modified under the Class Defaults panel. If it isn’t in this screenshot, I didn’t change it. 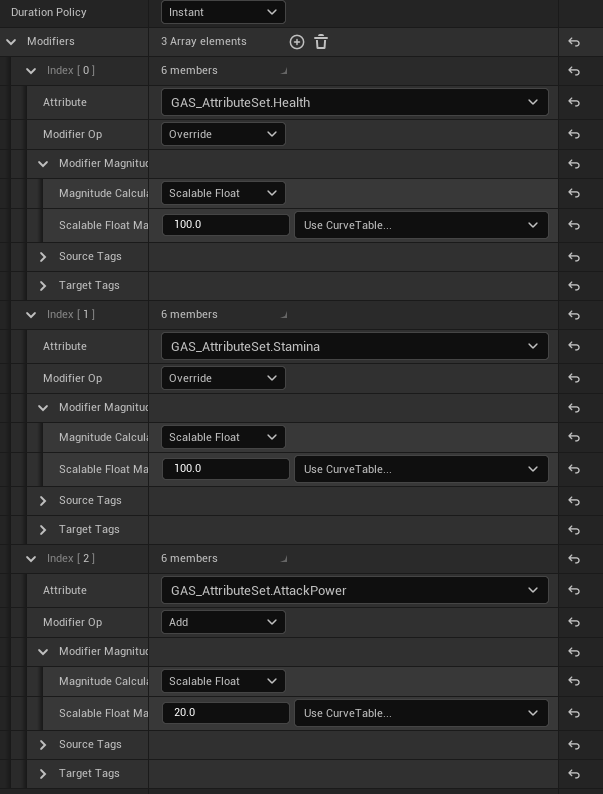 To prove the system is working, create a new blueprint that derives from GameplayEffect and apply the settings below 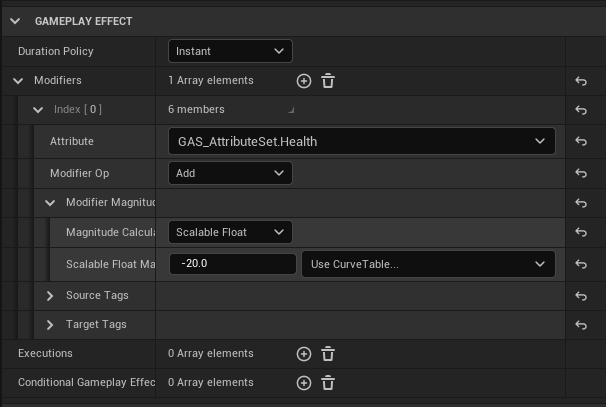 Then, in the event chart for your BP_ThirdPersonCharacter add a BeginPlay node and apply the damage when the game starts.

Hit play and then open a console and type showdebug abilitysystem to see that your HP should now be 80 on the lefthand side. Remove the damage to your player when youre done testing, but you can keep the GE_Damage asset around to use it later.

First, open the animation blueprint for your character and add a montage Slot 'DefaultSlot' to your anim graph. For me, the screen looks like the below after the changes have been made. Make sure to save and apply these changes. 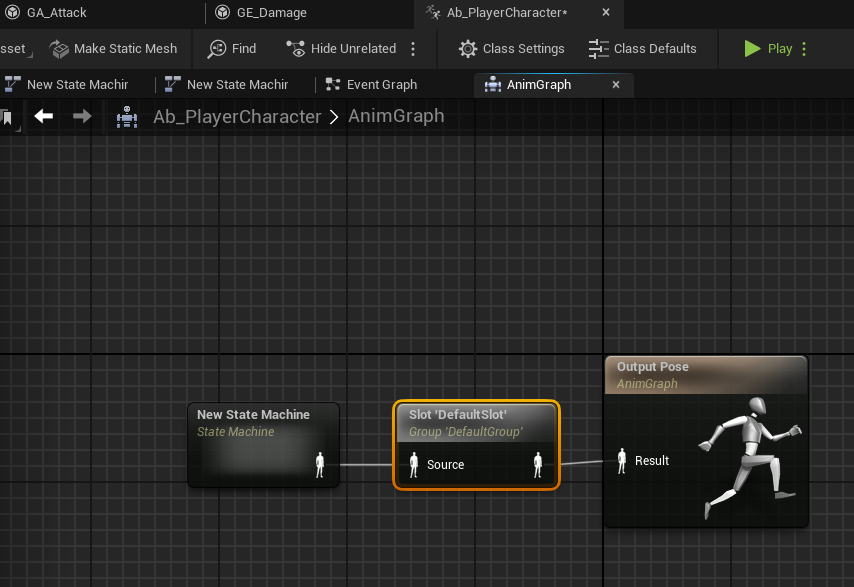 Make a new blueprint deriving from the GAS_GameplayAbilitiy class that we defined earlier. 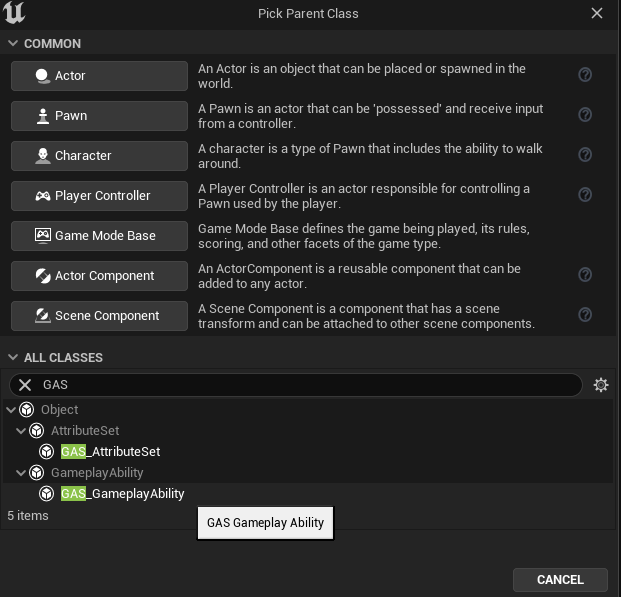 I named this GA_Attack and opened it for editing.

Make sure the Ability Input ID matches the input action we want the ability to be mapped to. This is found under the details panel.

Next, open GA_Attack for editing and add the following blueprint nodes. Add the GetActorInfo node in the context menu in the screenshot, be sure to uncheck ‘Context Sensitive’ if it isn’t appearing at first. 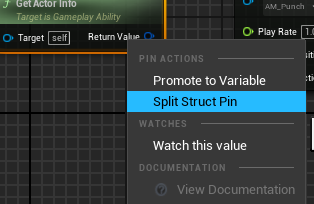 Under the Montage To Play pin on the Play Montage node, you may not have a montage available for your skeleton.

If you also don’t have an animation, check out Mixamo for a free anmation and see the page on Retargeting Skeleton Animations

Then create a montage by watching this quick youtube video. If you’re doing a simple punch animation, you probably just need to create a montage and click and drag the animation into the center of the screen and save. It’s pretty simple, but you can use Motages to do some pretty neat things. Maybe for the first montage try making a one-off animation that doesn’t loop like punching or a grab motion for interactions.

Once you have the montage made, select it here in this node, and then play the game. You’ll now be able to see your character performing the attack!

At a higher level, the steps for adding a new ability are below

To see useful information on the GAS, enter play mode and hit the tilde (~) key to open a console. Then, type showdebug abilitysystem, and youll notice you can see your character stats even if there’s no UI elements to represent them yet. 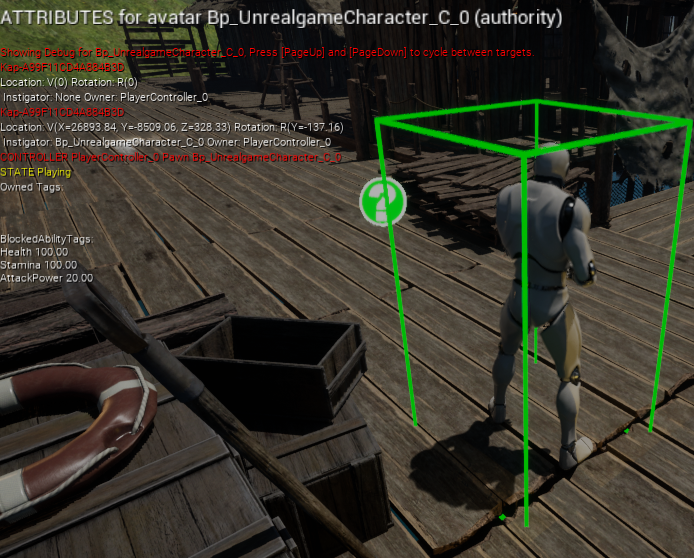